(Sept. 22) The Excellence in Communications contest, which recognizes the top communications efforts from NWPPA member utilities and associations, turned 29 this year and celebrated another spectacular year at the Northwest Innovations in Communications (NIC) Conference awards banquet at the Marriott Anchorage Downtown in Anchorage, Alaska, on Sept. 21.

Categories are broken up into four groups by size: Group A utilities having the smallest number of customers and Group D having the largest. Ten marketing and communications professionals from throughout the Northwest volunteered their time to judge the entries. A complete list of the first-, second-, and third-place winners can be found here. 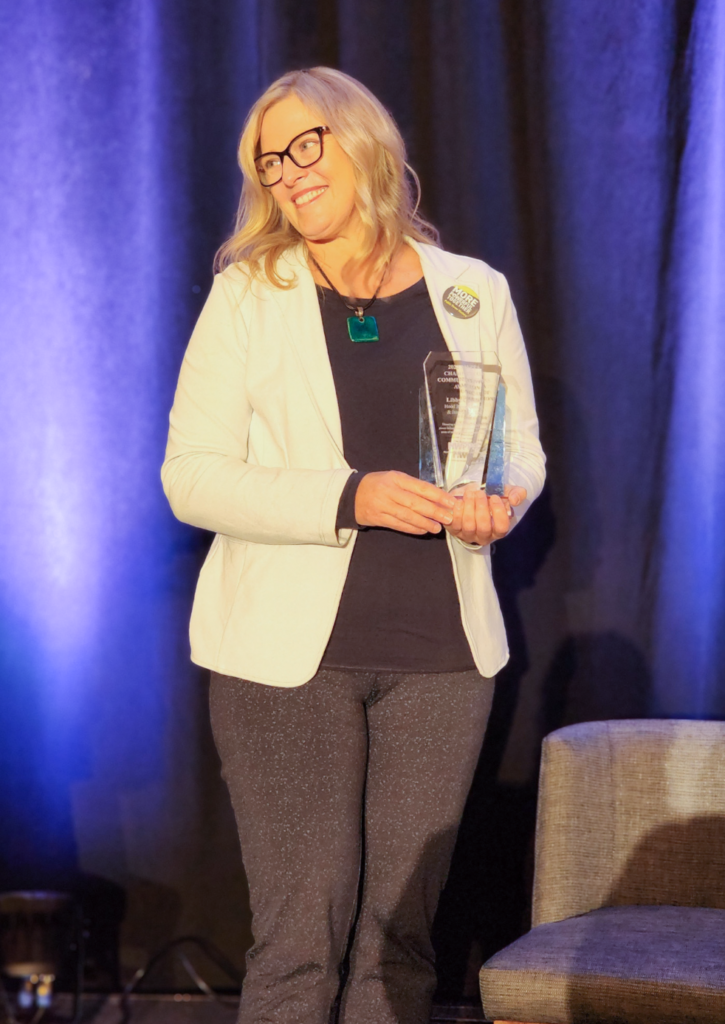 (Sept. 21) NWPPA announced Libby Calnon of Hood River Electric & Internet Co-op (Ore.) as this year’s winner of the Champion of Communications Award. The award (formerly the Lacy Peoples Award) honors an individual who has demonstrated a commitment to the public power industry, communication, and public involvement. The award was presented Sept. 21 during the Northwest Innovations in Communications (NIC) Conference at the Marriott Anchorage Downtown in Anchorage, Alaska.

Calnon began working in the public power industry more than 20 years ago, starting at Columbia River PUD (St. Helens, Ore.) first as its communications specialist and then as community & public relations supervisor. She is now the general manager of Hood River Electric & Internet Co-op, a position she has held since 2018. During her time in the industry, she has a long history of contribution to public utility communications as well as service to NWPPA.

“I had the pleasure of working with Libby for the last 19 years on countless community events and committees,” said Sarah Johnson, Clatskanie PUD customer relations and member services manager. “She is a wonderful example of communications excellence and is a stellar champion for the importance of communications in public power.”

The NIC Planning Committee selects recipients of the award based on accomplishments through at least 10 years of marketing and communication experience; at least 20 years of service to the industry; and promotion of public power through efforts such as community service. Current or former employees of NWPPA member utilities are eligible. Recent winners of the award include Lena Wittler of Clark Public Utilities (2021), Debbie Bone-Harris of Franklin County PUD (2019), and Joel Myer of Mason PUD 3 (2018).

The agreement calls for ESS to deliver a mix of its Energy Warehouse and Energy Center long-duration energy storage (LDES) solutions for integration with the SMUD electric grid beginning in 2023. SMUD will deploy the LDES systems in support of its 2030 Zero Carbon Plan which aims to reduce thermal generation, maximize local solar generation, provide neighborhood resiliency, and increase social justice and equity. LDES is a key component in SMUD’s decarbonization plan, without compromising reliability or low electricity rates.

As part of this multi-year agreement, ESS intends to set up facilities for battery system assembly, operations, and maintenance support and project delivery in Sacramento, creating local, high-paying jobs. In addition, SMUD and ESS plan to establish a Center of Excellence to expand the workforce and knowledge base for LDES technology in partnership with higher education institutions. The center will provide advanced LDES technical training, creating a statewide skilled talent pool to help build and maintain California’s fast-growing long-duration energy storage resources.

Good¢ents grants are awarded to nonprofit organizations within GVEA’s service area. Applications are reviewed quarterly in February, May, August, and November by the volunteer board of trustees.

The next application deadline is Oct. 31, 2022. Applications and more information about the Good¢ents Program can be found online here. Good¢ents is funded by the generous members of Golden Valley Electric Association (Fairbanks, Alaska). Since the program began in 2011, GVEA members have funded grants totaling $1,430,189.77.

Here’s a summary of the recent grants:

“We’re proud of our continued partnership with the PUD, and the growth of our EV charging program to help expand our region’s charging network and impact on our environment,” said Renata Maybruck, COO of HopeWorks Social Enterprises.

The project received funding from Washington state’s Clean Energy Fund. The CEF, which is managed by the Washington State Department of Commerce, contributed $135,582 to the project. The total cost of the project is approximately $150,000.

“The funding we received from the Department of Commerce’s Clean Energy Fund has allowed us to partner with HopeWorks to install EV chargers that support local residents, visitors to our region and our local economy,” said John Haarlow, CEO/general manager of Snohomish County PUD.

These projects align with the PUD’s electric transportation strategy goals, the City of Everett’s climate action plan and HopeWorks’ sustainability and equity goals.

(Sept. 15) At the Sept. 15 meeting of the Placer County Water Agency (Auburn, Calif.) Board of Directors, the board received a comprehensive report from staff on the progress of the Mosquito Fire and the status of PCWA’s Middle Fork American River Project, which is located within the footprint of the Mosquito Fire.

“While damage to the project cannot be fully assessed at this time, we can report that energy generation has been severely curtailed,” explained PCWA General Manager Andy Fecko. “As of this morning, our top concern is our largest powerhouse, the Middle Fork Powerhouse, which is located within a mile of the fire’s eastern boundary.”

Despite losing the ability to generate power, the agency continues to meet its minimum stream flow requirements out of Middle Fork Powerhouse and Oxbow Powerhouse, keeping water flowing and available for fire-fighting efforts. So far, there is no impact to water supply or water service for PCWA customers.

“On behalf of the PCWA Board of Directors and agency employees, I want to send our heartfelt condolences to all those affected by the Mosquito Fire,” said Board Chairman Mike Lee. “PCWA has a number of employees who live and work in the affected communities, and I thank those who have come together to support them. I also want to express our profound appreciation to fire-fighting personnel and other first responders who have battled record heat and unforgiving terrain to protect lives and property.”

The Mosquito Fire erupted on the evening of Sept. 6 near Oxbow Reservoir in the Tahoe National Forest. Since that time, PCWA has evacuated all employees from the area, coordinated with emergency responders on the location and protection of agency assets, and opened its facilities in Foresthill and Auburn to personnel working on the front lines of the fire. 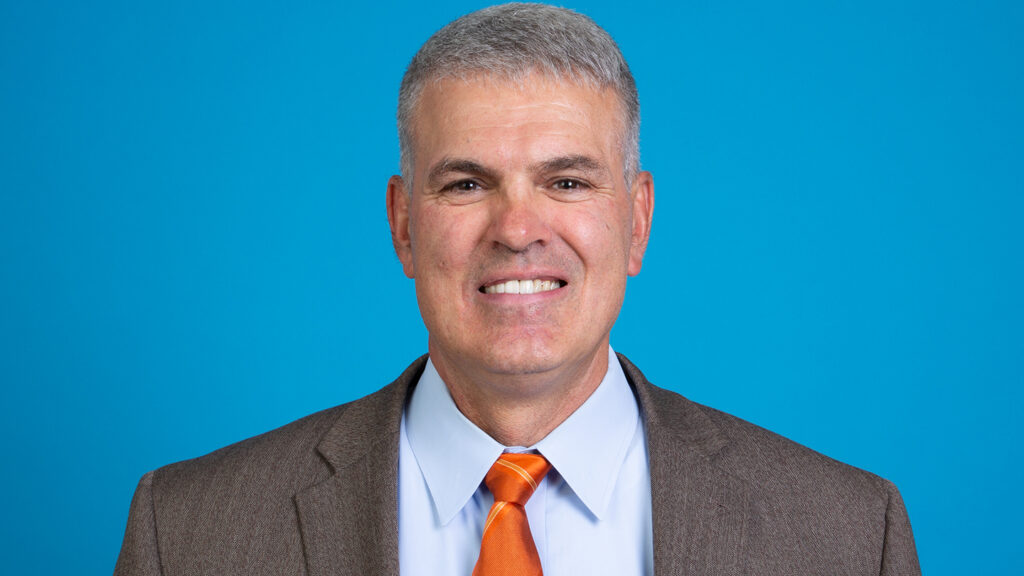 (Sept. 20) The Bonneville Power Administration has named Bill Leady as its vice president of Power Services Generation Asset Management. Leady permanently takes over the role on Sept. 25, after serving in an acting capacity since October 2021.

“Bill has demonstrated an ability to lead change, manage conflict and build teams to provide positive and lasting results,” said Senior Vice President of Power Services Suzanne Cooper. “In the last year, he has continued to cultivate relationships with our generation partners to help address challenges and find mutually agreeable solutions.”

Leady joined BPA in 2015 as an asset policy advisor. In that role he led a three-agency initiative among BPA, the U.S. Army Corps of Engineers, and Bureau of Reclamation to develop a strategic planning process for the Federal Columbia River Power System’s long-term capital investment plan and improve program execution of the capital program for the 31 federal hydropower facilities in the Pacific Northwest.

“I come to work every day feeling fortunate to be part of BPA,” Leady said. “I am honored to continue to serve in this role. I have a passion for learning and recognize that this position requires and will afford me continuous opportunities to learn and work with remarkable people.”

Leady will direct BPA’s Generation Asset Management program, including developing and implementing strategy to support power marketing and sales. In this role, he maintains relationships with leaders at other federal agencies and public and private utilities on matters related to Power Service’s generation policies and FCRPS management and resources issues. Leady helps guide and formulate policy for BPA’s strategic planning, fiscal strategies, and business decisions.