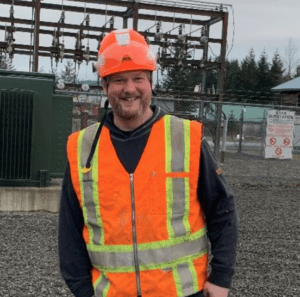 VANCOUVER, WASH. – Congratulations to Power Production Foreman Nate Cain for being selected for the Northwest Public Power Association 2020 Award for Excellence in Engineering or Operations for his significant technical, operational, and leadership contributions to Cordova Electric Cooperative during his tenure.

Among Cain’s many achievements during his 8.5 years with CEC is the integration of an organic Rankine cycle heat recovery system to a 5000hp diesel engine to improve efficiency by 5.5%. As technical and operating lead from procurement through automation, Cain was the project and thought leader that brought this quasi-experimental project to successful operation. This project advised the industry and has gained local and international recognition.

Cain contributed innovations to many other CEC projects with similar high impacts. For example, his recent innovative work in grid-scale battery energy storage at CEC has much broader impacts on our industry. Cain was the core project lead in the modeling, selection,

installation, commissioning, automation, and optimization of a battery energy storage system (BESS) on the isolated microgrid system that is CEC. This project has received national and international coverage for the past two years and is currently being touted by the U.S. Department of Energy as a best-in-class/best practices application. Cain and his colleagues have widely disseminated the success of the project in several highly visible national and international venues. The innovations and achievements associated with this installation and application are due in large part to his contributions.

“What really distinguishes Nate is a balance of complementary strengths,” said Cordova Electric Cooperative CEO Clay Koplin. “Nate served as an engineering/technician solving the technical challenges, as a tradesman in the wiring and installation of the system, and as a foreman leading the CEC project team. He coordinated a complex team of stakeholders in a lean resources environment to build the system.”

Also known as the Milton Hunt McGuire Award, named after the longtime manager of the Electrical Department of the City of McMinnville, this award was first presented in 1947 and is considered NWPPA’s most prestigious award for a utility employee working in the areas of engineering or operations. The Engineering & Operations (E&O) Conference Planning Committee reviews all nominations and determines who, if anyone, will be the recipient; because of the high caliber of requirements to receive the award, it is not presented every year. Recent NWPPA award winners for Excellence in Engineering or Operations include Dave Peterson of Fall River Electric Cooperative (2017), John Martinsen of Snohomish County PUD (2014), and Bob Coates of Kodiak Electric Association (2013).