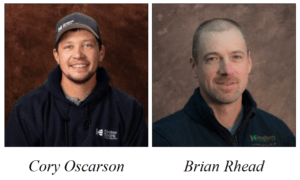 VANCOUVER, WASH. – Northwest Public Power Association and its Engineering & Operations Conference Planning Committee have selected Kootenai Electric Cooperative Journeyman Lineman Cory Oscarson and Journeyman Serviceman Brian Rhead for the association’s 2020 Safety Heroism Award. The two men assisted at an accident involving a semitrailer that had come uncoupled from its tractor and had struck another vehicle head on, trapping both the driver and the passenger of the vehicle under the trailer.

On August 14, 2019, Oscarson and Rhead were heading south on Hwy 95 in Coeur d’Alene, Idaho, when they came upon the accident. As they drove past the scene, they realized the accident had just occurred. They immediately turned around to assist the victims in the car. When they arrived on scene and found the weight of the trailer resting on the chests of both occupants, they both worked with the damaged landing gear and succeeded at getting the trailer off the victims.

“Due to the quick thinking and decisive actions of these two employees as they rescued the accident victims from under the semitrailer and applied immediate first aid, the victims were given a fighting chance of surviving what otherwise might well have been a fatal event for both,” said KEC Safety Director Thomas Maddalone.

The Safety Heroism Award recognizes an NWPPA member utility employee or team that displayed an act of unselfish and voluntary assistance in a situation where life, significant injury, or significant property loss would have been incurred were it not for the efforts of the individual or team. The NWPPA E&O Safety Subcommittee selects the winner of the annual Safety Heroism Award with concurrence from the NWPPA E&O Policy Committee.